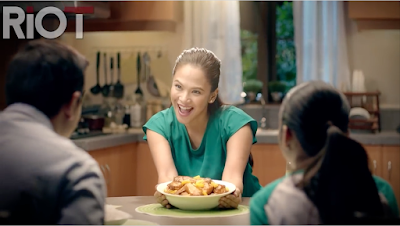 It's been airing on Philippine TV for a year now. In fact, it started airing around September to October 2015 after I left Manila. And I have never seen a clear copy of it until someone sent me this on the eve of my Forever 25th birthday! And what a perfect timing because I also received good news from my modeling agent Bon that this TV commercial is up for an extension! Wooohooo!

I had fun memories during the shoot. My co-talents were Angelson Rieta (daddy), Francine Diaz (girl), and the wonder boy, Nhikzy Calma. My 'kids' in this project have their own acting careers. You will see the wonder boy Nhikzy on ABS-CBN's Sunday variety show ASAP, strutting and doing a showdown with other famous celebrities. It was directed by the great tandem of Nick and Mike, and the assistant director was Direk Jules Dacanay. 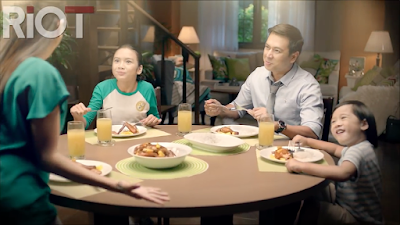 I saw the RIOT logo on top and searched Youtube and found the channel riotvfx01 posted this. Must have come from them.

Posted by SaritaOnline at September 28, 2016