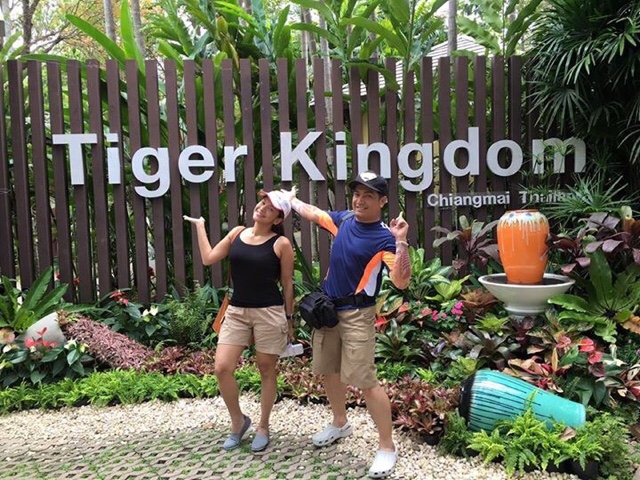 Before our month-long backpacking holiday, hubs and I sat down and decided on the attractions we wanted to see - especially in Chiang Mai where our friends Reen & Betty would be joining us. Coming up with a tentative itinerary, we have listed Tiger Kingdom as one of the places to visit for our first day after arriving Chiang Mai. So we rented a 'tuktuk' to take us around for couple of hours for 400 baht (USD 11.50). Although it was noontime, we didn't feel the noon heat at all as the breeze was a bit cool, which made it comfy. And sitting and chatting with our friends, it was so much fun sitting in a 'tuktuk'. 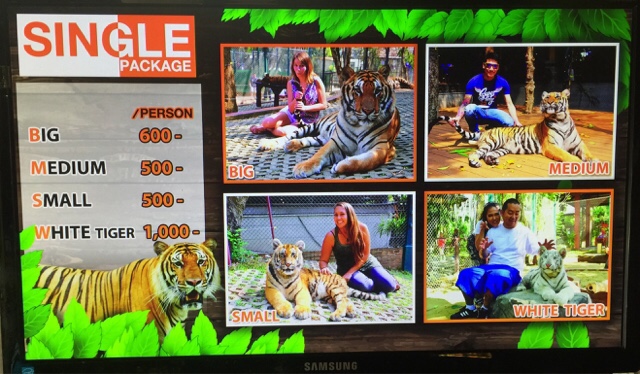 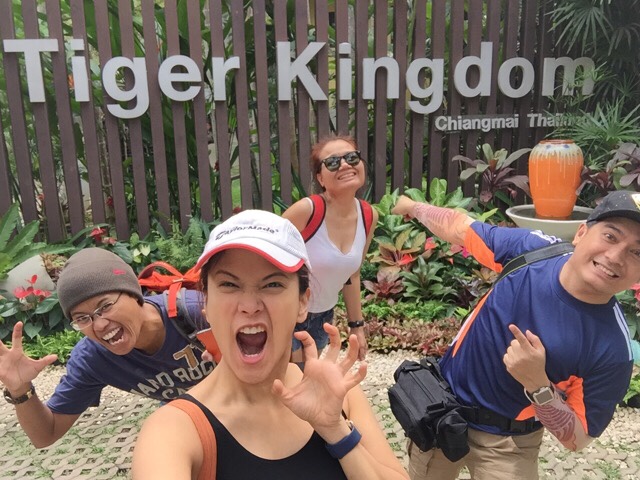 Our friends Betty and Reen just bought the park entrance ticket since they were scared of tigers. Since it's once in a lifetime experience for us, hubs and I took the 600 baht ticket so we can interact with a big tiger for 10 minutes inside the cage. The catch was although there were trainers inside the cage, they won't be taking your photos at all. So unless you're master with doing selfies without selfiepods that can take the whole scenario, you will have to pay an extra fee of about 250 baht for a photographer to take your photo with the big carnivore. Of course, hubs and I didn't have problem with taking photos and videos of each other, but yeah, we couldn't take our selfie together with the tiger because they asked us to leave our selfie sticks by the cage gate.

After paying for our tickets, we were asked to sign a waiver. Well, actually it was an insurance thingy that came with our fee. Felt like brushing ourselves against danger seeing the words I dread to see nor hear: death, accident, injury. It actually made me remember the awful feeling when I did bungee jumping in Shidu, Beijing in 2010. 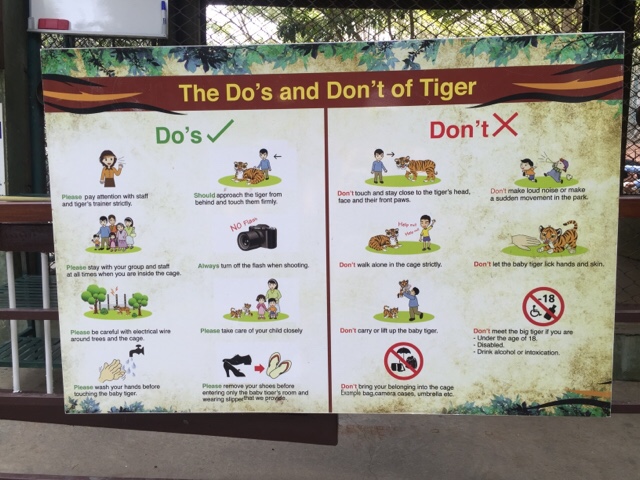 Before entering the cage, we were briefed with the do's and dont's while inside the cage, no flash photography, no selfie sticks. As we entered the cage, I could feel the tension and the presence of a scary mammal. The cage had couple of big, trained tigers resting under the noon sun, their trainers were on standby just a couple of meters aways. I was secretly looking around for an escape route should anything happen. LOL!

We were ushered towards our tiger who was resting on an elevated part and man, it was indeed a big tiger! Its paws were bigger than my face and I felt that it could swallow me wholly without a gulp! 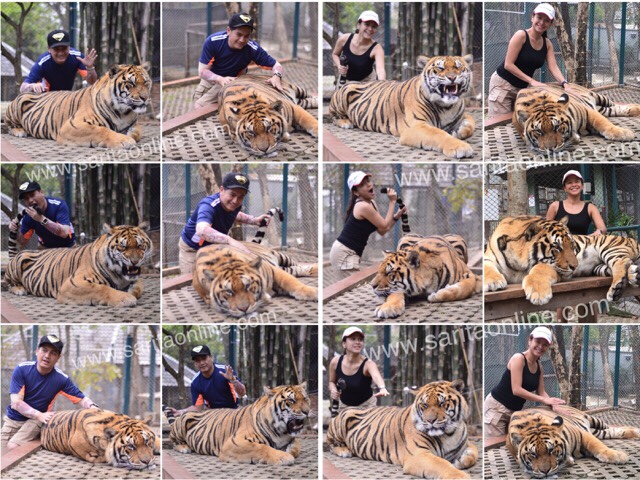 So hubby took his turn first. I took pics of him using 2 different cameras on both hands but I found it confusing using one camera after another because my eyes were also set on the tiger who was occasionally showing his teeth on me and licking his lips as if his lunch - aka ME - has just been served. Or maybe I just look THAT yummy. LOL!

Then my turn came. I was trying to be an expert holding my camera doing a selfie video but it was really hard as my attention was on the resting tiger. But whenever it slightly moved its ears and head, my eyes would grow big and I acted like a statue behind it. LOL! Trainer told me to hold its tail and to come closer. I told hubby to hurry up in taking my photo and video in between my scared grin. LOL!

I thought it was all over, felt a bit relieved, and my legs were racing to exit the cage, but the trainer told us to go to the other big tiger resting on a table. LOL! So hubby took his turn first, as usual. And luckily, when my turn came up, the tiger changed its position therefore showing a more better photographic angle.

We still had 5 minutes left out of the 10-minute allowance they gave us. They told us that we could interact more, maybe lie beside the tiger if we want to (no thanks!) but I couldn't bear the tension inside the cage so I told the trainers that we're all good to go out. LOL!

We just roamed around the park, which wasn't that big to be honest. There were closed sections where they were doing reconstruction, maybe for expansion. We saw different tigers in different cages. Siberian tigers and an African lion were all safely caged towards the dead end of the park. We were watching the African lion when something caught its attention and let out a big, deep roar. Woahhh! Damn! It was my first time to hear a lion roar right before my eyes - 2 meters away for its cage to be exact - and even the bravest man will be stunned by it. I just stood still and forgot to take its video unfortunately.  Being the king of the jungle wasn't just a coined word for a lion. It really demands the royalty attention but its presence and just by its shivering stare that pierces through my very soul.

Watch this iPhone-edited video of our Great Asian Adventure at the Tiger Kingdom in Chiang Mai, Thailand. You can also click HERE to watch it on Youtube. 👍🏻

CHECK OUT OUR TIGER KINGDOM GALLERY