That Night in Genting

When we knew that we didn't have any appointment or photoshoot on the last Sunday of May, we decided to spend time in Genting. It's also the only chance for mini-me to go back there since she'd be leaving for Manila soon for her school opening next week.


We woke up at 11AM and hurriedly took our light breakfast since we wanted to catch the noontime bus to Genting. But when we arrived at KL Sentral, all tickets were sold out and the next trip would at 3:30PM, which would be too late for us. So we just took the taxi at RM70 which would take us all the up to First World Hotel in Genting - no need to ride the cable car, weeee! :)


We arrived at First World Hotel at almost 2PM but the lobby was swarmed with people of different races with their suitcases and bags. As we didn't book ahead for a room, we got disappointed when we saw big lit sign that's saying 'FULL'. So we tried calling our sister band Peach Apple Band to ask them whereelse we can stay but nobody answered - so we understood that they're still sleeping. While waiting for a sign from them, we decided to stroll around first. Mini-me didn't want to go outdoors since she's already been there a few times before. So we just stayed indoors and enjoyed the indoor theme park, while Marl took his own way to take some interesting photos. 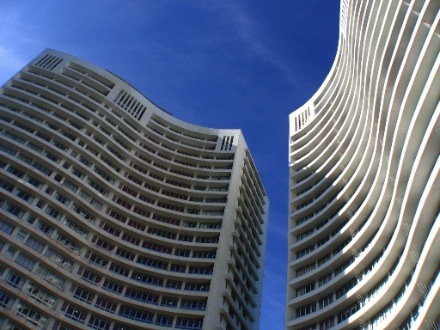 AT THE RIA APARTMENTS

It was walking distance down the hill from the First World Hotel. And when we reached the building and went in the lift, there was already a sense of creepiness. We were taken to the 14th floor where a management office is located. Since the RM80 units were all occupied, I was asked to pay RM150 for the ONLY available unit and another RM50 for the deposit.


And so the guy handed me the key... with a room number on the keychain that said 13414. WHAT?!?!? We're staying on the 13th floor of a haunted building?!! Did we have a choice aside from going back to KL instead?! Sadly, no.


So we went to our assigned unit which was actually nice for RM150. It has 2 bedrooms, 2 toilet/bathrooms, living room, dining room and a kitchen. I thought, "hmmm, nice!", just trying to forget the fact where our unit is situated. A spacious unit... just for the three of us. We all actually stayed in the spacious master's bedroom where there's a king-size bed. There's another single bed by the window but I insisted mini-me to stay with us in the king-size bed. There's no way I'm letting her out of my grasp and sight!

The room was already cold even though there was no air condition at all. The cold wind gets in the partly opened window of the room which makes the dusty curtains move. The bathroom door in our room, which can't be locked from outside, makes creepy noises from the wind, too. And there we were, trying to get even just a little nap before having our dinner and soon, we fell asleep.

It wasn't long enough until I heard Marl's snoring which is actually a sign that I can go and sleep - yeah. it works that way for us. LOL. And soon enough, I was having my own dream away from Genting... until I heard a crying scream, "ahhhhh!" - it was Marl having a nightmare. I reached out and woke him up and he continued his sleep again. As for me, I couldn't go back to sleep anymore so I just played with my iPhone until it was time for us to really 'wake up' at 8:30PM - just in time for dinner back at the First World Hotel. I asked Marl what his dream was secretly since I didn't want Selena to hear about all these spooky stories. He said, he dreamt that he was being pulled until he almost got choked. He said it was scary and felt so real. Of course, it was just a nightmare... or maybe not.

I was so eager to get out of the place and got in the lift going down. Marl pressed the Ground Floor button. The lift is undeniably slow which makes it more creepy. The doors of the lift opened and we stepped out only to realize it was not the Ground floor yet. There were 2 suspicious guys sitting on the floor across the lift and I felt really scared because Marl was obviously carrying his camera and I don't know what those guys were waiting for. I couldn't wait for the lift anymore and took the stairs going one floor down. Boy was I thankful when I saw the exit door! My next concern would be going back to the apartment later in the night... *oh no* 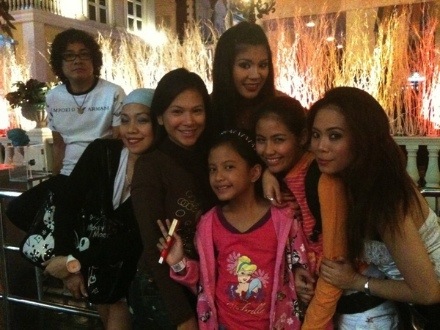 
Since it would be tiring to trek up back to the First World Hotel, we took a private taxi instead. Private taxis only ask RM2 per person because it's just less than 5 minute trip up the hill - how convenient! We met up with our friend Chona of the Peach Apple Tree Band at Starbucks. Since they'd start performing at the Patio Bar at 9:30PM and mini-me can't go in, they just gave us directions and recommendations for dinner and chill-out places like internet cafe and arcade games. We had an enjoyable dinner at the Pizza Factory and beside there, there's a cybercafe where Marl spent his time while mini-me and I played some games in the arcade.

It was already midnight when we went back to The Patio bar and Peach Apple Tree band was on their break before their 2 other sets. Most of the rides were already closed and so were the shops. Marl had an idea of taking photos outside the already-closed shops. The photos looked interesting which will be posted in this blog soon. :)


When our friends finished performing, we all went back to the Ria Apartments together with some of the Filipino staff from the casino. Apparently, they also rented out a place for us to have a little get-together party for the night. Had we known about it earlier, we wouldn't have gotten that room on the 13th floor. Plus, the unit that they rented is a lot smaller than our unit. So we had supper and didn't go back to our 13th floor unit anymore. Mini-me and I slept in the master's bedroom, while our friends sang and talked nonstop with Marl in the living room - 'til the morning!


At around 6AM, Marl woke me up to say that one of the Filipino guys came running back to the unit because he saw a woman floating in the corridor on the 5th floor. OMG. I only have short naps after hearing that story. And I was so thankful when I saw the sun seeping through the thick curtains... ahhhh, Monday morning!


One of the reasons why we went to Genting was because some of our friends Gaily, Khring-Khring, and Joy want their photos taken by Marl, just for some test shots. Of course, Marl asked me to join and guide them so I also prepped myself up even though I didn't bring my makeup kit with me. I also borrowed a top from Chona and just sported a more casual look with my loose jeans and sneakers.

We didn't go far to have photoshoot, we just went around the Ria Apartment and to the 'Cradle Rock' to find some spots. I guided them on how to pose since the concept is more like "On the streets of Genting".


We had fun since the Filipino guys from the casino were so funny and making a lot of side comments in every pose that my friends did. The last part of the shoot was the jumping shots which resulted into awesome images. Watch out for this space for the update when the photos are already posted by Marl. :)


We took the noontime bus back to KL and back to reality since it's gonna be another working week for us. Although we had mixed feelings about that night in Genting, Selena enjoyed her time because she didn't know anything about it. Best to keep it from her.

thanks for sharing. Been hearing lot of story from my friend too. Take care ya!