When I got a call from the people of myBATIK magazine and was offered to do a photoshoot as the main model for their magazine's next issue, I was ecstatic. It was around the same time that I did my first photoshoot for HerWorld magazine. myBATIK magazine is a quarterly magazine that features anything that has to do with batik - batik designed clothes, batik fabrics, batik designers, etc. So the day that I've been looking forward to finally came and yes, it was today.

Since I needed to be in the location at 7:15am, my friend Reen picked us up from the hotel at 6:45AM. But when we got in the location, I was told that the crew was still on their way. So, Marl, Reen and I decided to have something from the nearest mamak stall. Then we went to the location - Taman Tun Park. What we didn't know was we went to the different parking lot - the one up in the hill with the jogging track. The rest of the crew were in the main parking lot, way down the hill.

So leaving Marl in the jungle upon his request (which he trailed for 2 hours before we got a "distress call" from him for being lost LOL), Reen and I went back to the car and met up with the crew at already around 8AM. I started my makeup right then and there at the parking lot. What I didn't know was it took 2 hours for look that I could have done in 30 minutes. But Kudos to the makeup artist that they provided, named Agnes, she was able to make me look like I had enough sleep, even though I only slept for 2 hours. Marl, on the other hand, was finally rescued my Reen and Melfay from being lost in the jungle for 2 hours and they arrived in the main parking lot just in time. 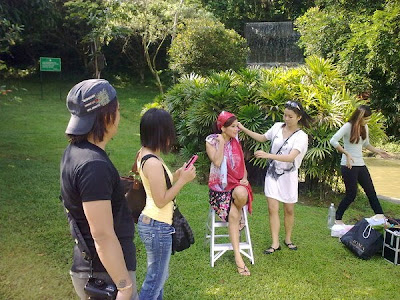 Behind the scenes shot taken by Reen :)

We started the photoshoot at around 10AM. As Marl was not the official photographer, James Wong, the assigned photographer took some interesting shots of me in batik fabrics draped over my body. Unfortunately, Marl was asked not to take photos while James was working which was kinda strange for us. Marl is my husband and he ALWAYS is asked to take photos of me whenever I work with other photographers. But it was alright, we just politely obliged to his request.

At one point and I think on my 4th change, I was asked to climb in the middle of the raging falls that was one of the sights in the park - much to my friends' and Marl's disapproval. They were so worried about my safety as the big rocks are expectedly slippery. Kittie, the fashion consultant and my assistant, was skeptical for me to do the waterfalls scene. But much to the photographer's insistence and even providing me his socks so I wouldn't slip on the slippery rocks that has algae growth, I was able to go in the middle of the falls. We took a few shots of me standing on a dry rock that wasn't touched by the waters while the photographer was in the base. In fairness to the photographer, the shots turned out fantastic. And after that, Marl and Reen helped me out by lending me a hand to hold on to.

We had a lunch break not long after that so Reen, Melfay, Marl, and I went to our secret lunch destination - away from the TTDI park. Yes, secret because none of the crew knows where we had it LOL. We all went back to the park after lunch and continued shooting.  The whole photoshoot basically had me draped with 10 different batik fabrics which were really nice. Towards the end of the shoot, I was asked to wear 3 gorgeous batik dresses.

I can't say I had as much fun as I did with the rest of my past photoshoots since this was the first time that I had a full-day shoot out in the scorching heat of the noontime sun without any place to actually rest on (aside from the step ladder that the photographer brought and a few shades under the trees), but I definitely have learned something from the experience. I can actually say that I was able to walk in the slippery rocks of a waterfall, stepped on a huge anthill, lie on the hot pavement, go through the scary jungle part, stand on top of a picnic table, pose effortlessly under the noontime sun - all for art's sake.

I can't wait to see the images in myBATIK magazine. I hope that it gets released for the 3rd quarter (July/August/September) issue - while I'm still here in KL. Kudos to my husband Marl, who is ever supportive, and to my friends Reen and Melfay, who accompanied us and who worried much for my safety. They never left me even though they didn't have any proper place to rest in while waiting for my shoot to finish... and even accompanied me in my "rewarding time" afterwards - ice cream moment! :) Love you guys!
Posted by ~*.*~ SaRiTa ~*.*~ at June 13, 2010

dear sarita, appreciate that you can write for us your latest postage address so that we can send you a copy of the mybatik magazine where you are the feature modal. thank you. email to manager@tmsart.com.my