I'm so humbled and happy to be featured on Yahoo! Philippines today. Weeeee!

The featured video was actually shot on the day when my idol Michael Jackson passed away in 2009. We received a request slip asking for Beat It & Billie Jean. I was about to apologize because I actually haven't done it yet in a long gown - but too late because our band leader already loaded the song & pressed play! Sooooo there it went. LOL.

I'm so used to performing it in an MJ costume, so basically the Yahoo!-featured video was my first attempt in performing it in long gown & high heels, which was shot by my friend and god sister, Melfay86.

Since Yahoo! News change frequently, you might not be able to see me in one of the 16 featured headline news. But you can see it archived here: http://meme.yahoo.com/spotlight/p/osqgkhr.

And in case, you missed the Yahoo! Philippines homepage today, here's a screencap by @JoeyAlarilla (Maraming salamat, Joey!): 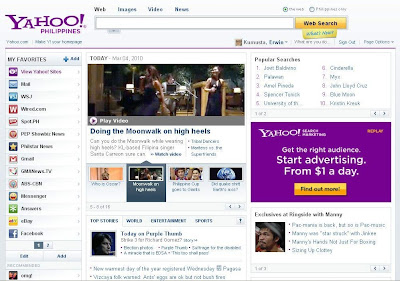 no prob, you're welcome, sarita :)

We saw the feature on yahoo, we've watched the video, and were amused and very much impressed.

We we're wondering if we could get an 'email interview" from you, to let people know more about you and let them know about your site and your twitter account.

maybe 12 questions that (MgaEpal.com kinds of questions) that you might enjoy answering, to be featured as a post at MgaEpal.com.

If ever you decide to have the email interview please let us know at MgaEpal@gmail.com. Thank you. God bless.