FULL VIDEO: Celebrating the Presidency of President Duterte in Malaysia 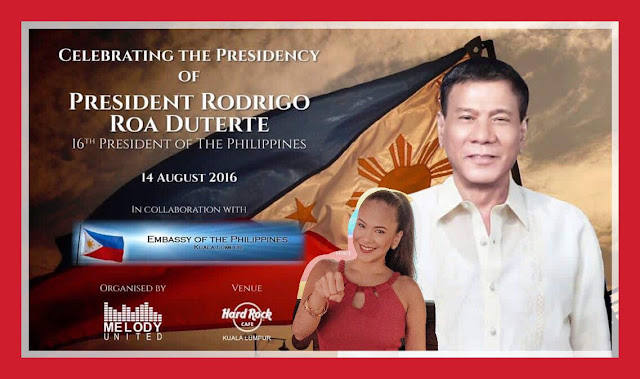 Indeed an honor for me to host the Victory Party for Philippines President Rodrigo Roa Duterte, organized by Melody United in collaboration with the Embassy of the Philippines Kuala Lumpur, held at Hard Rock Cafe Kuala Lumpur on August 14, 2016.

It was a successful event, well-attended by our supportive kababayans, different associations and organization like Malaysian Filipino Club (MALFIL) and Philippine Ladies of Kuala Lumpur (PLKL), and other notable local VIPs.

Just like other events, it started fashionably late and I took on the stage with my script (of course) as the Emcee/Host of the event. First part was kinda dragging, as guests commented, with lengthy VTRs/video clips of his speeches and promotional videos but it was helpful for the guests to know more about President Duterte. Speeches followed then the entertainment began as Melody United's recording artist Kris Patt, who is actually from Davao City, took on the stage with her song performances. Although he almost missed the event, President Adviser for Peace Process in the Philippines, Secretary Jesus "Jess" Dureza, finished off the event with a very inspiring speech.

The event was fun overall. It was an honor and privilege for me to be a part of it, especially that it was done for our beloved President Duterte. Super thanks for the organizers of the event.

Here's that short video when I introduced the Philippines Ambassador to Malaysia, His Excellency J Eduardo Malaya, and amazingly, people finished the song with their clenched fist up in the air while Freddie Aguilar's "Para Sa Pagbabago" song played:


Here's the FULL VIDEO of the event:
(courtesy of Melody United)
Posted by SaritaOnline at August 25, 2016