Selena sings "And I Am Telling You" for PCS X Factor 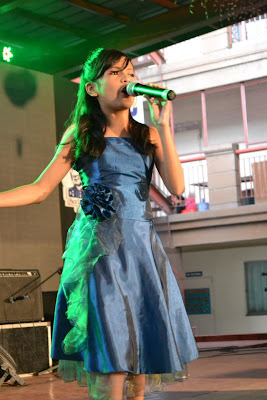 So she's got the guts and confidence to join singing contests that her mom has lost through out the years. Yes, my mini-me joined another singing contest again! Her school, Paco Catholic School, held their own version of X Factor contest where they had lots of students audition. Like the famous TV show, there had been different performances and eliminations every week for almost 2 months. And just as we guessed, she survived every week because of the judges' belief in her.

But just like the said TV show, their school also had their own version of garnering votes for their students. Since the students are not allowed to bring cellphones during school hours, they had the students pay-to-vote for 1 peso per vote. The votes became crucial and critical as the Top 10 finalists were announced... and mini-me was one of them. She was the youngest being the only representative for Grade 7. The rest of the contestants were 3rd and 4th year high school students.

We have always voted during the past weeks by increasing her allowance every voting day because she wanted to become one of the Top 10 finalists. So we thought that votes wouldn't matter that much anymore for the finals, that judges' scores would matter more. But we were wrong. Half of the overall percentage were based on the judges' score and half were still based on the votes gathered during the past 4 days before the X Factor finals. So since we realized that we've been "buying votes" for her, we didn't want to tolerate it and told her that winning a talent competition based on money is not a good competition at all. Yes, the money will be used for the school to buy new musical instruments, but as a parent who believed soooo much in their kid's talent would have thought the same way as we did. To others, yes it's just money... but would winning it really matter? We were quite surprised that the other contestants' families "spent a dime" just to see their kids win. I'm not that kind of parent. Guess, to each his own.

Anyway, here is mini-me's performance of the song "And I Am Telling You" which she has chosen to perform for the finals. Well... I might have hinted it to her since she has sung it in her first singing contest when she was 9 years old. But she wanted to sing it for X Factor. I just corrected things that are needed to be corrected from diction, delivery, blocking, and stage performance. Yes, I cried after the performance. And yes, I'm such a proud momma!

Hi...Sarita,it's been a LONG LONG TIME since i last watched u singing at Concord Hotel,KL together with my 2 daughters...GUESS WHO i am!