The Main Event with Rocky Gathercole 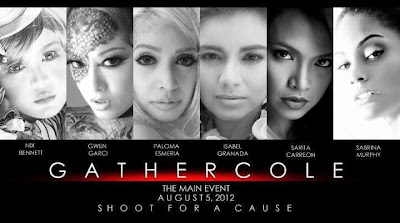 I am sooo excited to be a part of a big fashion photography event featuring 6 models and of course, the creation of the internationally acclaimed fashion designer, Rocky Gathercole. It is a charity event, which means the money that will be gathered for the event will be for a cause. Participants will be able to shoot Nix Bennett, Paloma Esmeria, Isabel Granada, Sabrina Murphy and myself in different outfits. Makeup will be done by Barbara Bennett. So if you're a photo enthusiast or into fashion photography or simply love shooting photographic faces and sexy bodies, now is the chance for you to expand your portfolio. :) Contact my friend Gelo Bautista at 09205225665 to be a part of the Main Event at Fernbrooks Alabang on August 5, 2012.

WHO IS ROCKY GATHERCOLE?
When I first heard about this world-class international fashion designer, I thought that he's an American, a European, any nationality but a Filipino. Who wouldn't? Gathercole is not a usual Filipino last name. But when I researched about him and added him on Facebook, I was in total shock that he is actually a pure Filipino. In fact, he was born in Pasay City and has lived humbly in Manila before he went to seek a greener pasture in the fashion capital of Middle East. Dubai is where saw his dreams of being an international fashion designer come to life. Over the years of hard work and going through needle holes, Rocky was able to make a name for himself. And since then, his avant garde fashion creation has not only graced the big runways of Middle East and Asia, but has also made a mark in Miami and most recently has graced the Big Apple that is New York City. But despite of all these big successes and making a household name in the fashion industry worldwide, Rocky has stayed grounded and never changed a hair. This trait is what makes him loved by his dearest friends and family. Those who have widely discriminated him are nowhere but already hiding their tails in their own little corner. Nothing is stopping this Filipino pride, Rocky Gathercole! Go Rocky!
Posted by ~*.*~ SaRiTa ~*.*~ at July 29, 2012