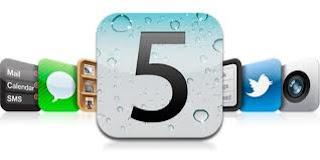 I have finally updated my devices to iOS 5 after two nights since it got released. Actually I could have used the Dev version that was given to me by a friend on Twitter few months back but I was just too lazy to backup everything. But with the official release of the said iOS, I didn't have much dilly-dallying to do. I downloaded the firmwares for my devices for about 5 hours. I have quite a trauma in restoring an iPhone in the past and everytime I had to restore it to a current version, I still feel the same way. Last night was no different. I was so nervous looking at the progress bar while restoring the iPhone and the iPad. LOL! But alas, I haz succeeded! :)

I love its new features like iMessage, multitouch swiping for multitasking, improved camera quality, Twitter integration, sharing files between devices via iCloud, split keyboard on iPad, the ease to reply any messages from the lock screen, and its new notification center. And it still has other features that I haven't explored yet.