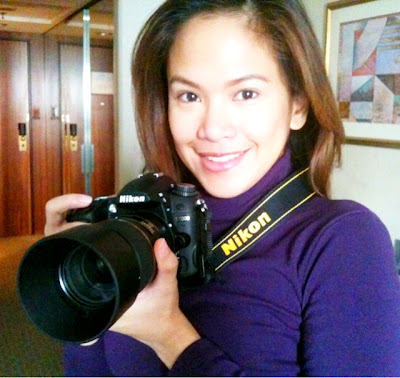 I wasn't feeling well last night, and I was ready to go to bed early so I can get up early for China Open. Nenad Zimonjic of Serbia invited us last night for his finals match with Mikael Llodra in men's doubles. Then I said to hubby, while lying in the bed, I wish that I already have a Nikon D7000 - something that I've been wanting to have since last year - so I can start with my videography seriously and play with it during the finals match. Then he just said, "let's buy one tomorrow before going to the China Open, for your late birthday present". Suddenly I felt better. I was sooooo happy that I jumped up and down the bed like a little kid and forgot that I wasn't feeling well! LOL!

NIKON D7000
Because of excitement, I wasn't able to go to sleep. Of course, it's been my dream camera for almost a year now! We went to bed at almost 7AM and woke up two hours later... to be in the Wukesong photography building when they open at 10AM. LOL!

Went back to the hotel to charge its battery for at least an hour before going to the National Tennis Stadium. I used hubby's Tamron SP AF 90mm f/2.8 Di Macro Lens, to play around with because I'm a fan of bokehs. I took few HD videos during the match. Read more about my China Open 2011 experience on my next blog.

We had lots of fun today, especially me who just got another great toy to get acquainted with. It's my first DSLR and eventhough I love photography and film making, I don't know the technical stuff of a DSLR camera. I guess I'm so lucky to have a talented hubby who's one of the best pro photographer there is. Yes, love thy own! LOL. He's letting me use all his Nikkor and 3rd party lenses and try them on my new toy. Can't wait to really use this D7000 to its full advantage! Will update you guys soon! Weeeeeeeeeeee!

Note: Photos on this blog post were taken from an iPhone, not from the D700. :-)