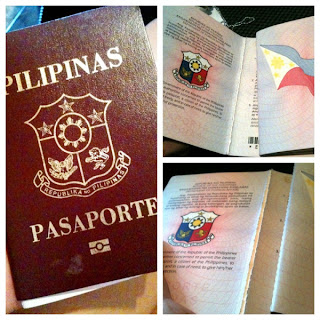 I just got my E-passport in September 2010 from meticulous and long processing in DFA Manila and with barely a year of seldom use, the cover has already come off. As you can see on the photo above, the rest of the passport pages - which are intact by paper sewing - was already detached from the hard cover. It's the second case that Philippine Embassy in Beijing has faced. So when I went to the embassy, they weren't surprised with its condition and immediately offered for us to renew the passport ASAP so that I won't face any problems should I need to use it.

But there's a bit of a conflict. Our current visa is only until the end of October and soon, the hotel will be asking for our passport for visa extension. Yes, we are extended here until the end of the year. So if I had my passport renewed, I will have to wait 6 weeks for my new passport and only then, I can apply for a visa extension. So I need to have the new passport back 2-3 weeks before my visa expires.

I even contacted Ambassador Romy Ong, whom I have met in Kuala Lumpur few years ago and would always come to the lobby lounge of Shangri-La KL to watch us, and relayed my problem to him. We have always been in constant contact since then, he would always check on my health as I was always sickly in the past and he has become a good friend of mine. My husband and I even had lunch with him and his son in Makati few years ago.

Anyway, he told me to contact certain people in the embassy here, as he used to be the Philippine Ambassador to China. He can't promise that he can expedite the processing but at least, I get to talk to the right people. So when I went back to the embassy, they told me that although they cannot promise if I'll have it in a month's time, they said that  I wouldn't need to pay for it. How nice is that?!!! They're replacing my e-passport for FREE!!! They took my photo, my signature, and thumb marks and VOILA! No more waking up early and long queues like in DFA Manila. :-)

Now all I have to do is enjoy work, relax and wait for my new passport. Hope it won't take too long. :)

You'll get your title to alter your international id in a sped-up way utilizing our visa administrations. Essentially select the title to alter the visa speed benefit choice from underneath that best meets your needs.