Raising concern for an imprisoned fellow musician in Iran

Earlier today, I got messages from Sonny Panis, one of the members of Pinoy Musicians Network (PMN) about a fellow musician who was jailed in Iran and is now facing execution for drug trafficking charges which he was believed to be innocent of.

His name is Ernie Guinoo Tamonde and he also happens to be a member of the musicians' site that me and my husband run - Pinoy Musicians Network. His case is no different from other innocent victims who eventually became suspects of drug trafficking. He wrote a letter from his cell to get help and to appeal to the Philippine government about his case. Read the full story here.

As I've searched about him on the internet, I found a Facebook page about his case and his appeal. If you have access to anyone from the media, government agencies or Philippines embassies who can help Ernie, we would greatly appreciate it. I hope I can help in my own way of spreading this news to our fellow musicians and those people who know him.

Below is a copy of the 2-page letter he wrote. 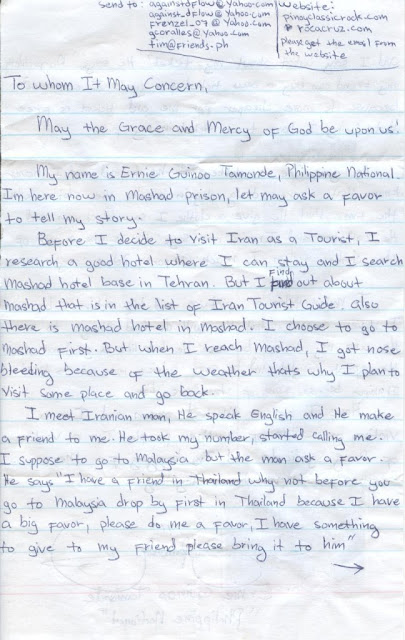 Helping imprisoned Ernie G Tamonde comes in many ways. As a Filipino and an associate of our friend Cedric Panis ( La Union ), we are also concerned of his plight in an Iranian jail.
Primarily, it's the gov't agencies of the Republic of the Philippines which should be tasked in doing whatever Help and necessary in this case. On my part, and the others like the Panis brothers, and most of us, what we were really trying to do is to drum up enough informations to these ( Phils.) agencies concerned to make a follow up on whatever help that can be done to ease and have a fair trial for Ernie G Tamonde.
Diplomatic, Technical and other acts thus implies another kind of help from the
most knowledgeable Institutions that can handle such intricacies.

i would like to share with you the latest development regarding ernie tamonde who is from the town of magpet here in the province of cotabato. we hope there would be more positive developments. salamat po.

here is the link: http://bit.ly/gad2aX