To most followers and friends of U.R.B. throughout the years, it's not a strange fact to you that our band always has changes every couple of years. And this time, a year and a half with the band, Aretha has decided to leave. Not for any personal reasons that would put the band on the grill, but for the sad reason that she has to do a major surgery soon.

More than a month ago, Aretha went for a check-up because her blood pressure would always shoot high. High blood pressure runs in their family and unfortunately, she has "inherited" this disease since she was in her early 20's. So anyway, she went to the doctor and had a full checkup. Much to her shock, she found the reason why her blood pressure would always go up. Her results under CA19.9 (tumor marker) showed that there's a tumor in her stomach that needs special attention. She was then asked to do further tests. All test results showed that there's a tumor in the tail of her pancreas.

Aretha was advised by the doctor to have an ultrasound biopsy which costs as much as the actual surgery to have it removed. So she just decided to have it removed instead of just having a biopsy. That was in the beginning of June. But since we weren't prepared of what to do, which means no singer to replace her yet, she just stretched her stay until the end of June.

So as of this moment, Aretha is on the plane on the way to the Manila. She's gonna catch a noontime flight later to go back to her hometown Cagayan De Oro City in Mindanao. Hopefully everything goes well that the tumor will be removed safely without any complications and that Aretha will have a speedy recovery. It would really mean a lot not only to Aretha and us, but also to her family and friends, if you can include her in your prayers and intentions.

The search for the replacement wasn't easy as most of the singers we know of are either not here in Malaysia or already have gigs. Luckily for us, we were able to find a replacement singer before June ended, her name is Marthy. We've known Marthy in 2005 when she used to play at the Concorde Hotel and we're glad that she's free after her contract in China with her present group. She will be joining us in our last month at The Pub of Shangri-La Hotel Kuala Lumpur. We just "borrowed" her from her present group so that we can finish our contract here.

OUR MESSAGE TO ARETHA

Rets, we thank you for all the good times we've been through. You're a great person who has such a big heart, I guess I'm not the only one who can say that. Thank you for being not just a friend and sister, but for being the best colleague I've ever worked with. I'm gonna miss all our nonsense stories and gossips during "coffee bonding" on our breaks. Our friends will surely miss the impromptu funny antics we used to do onstage and those bloopers that we couldn't avoid. But most of all, I'm gonna miss you. Please take as much rest and time as you want and as Marl and I told you, when the right time comes when you're all well and healthy again, we would love to work with you again in the future. We love you, Rets! *hugs* 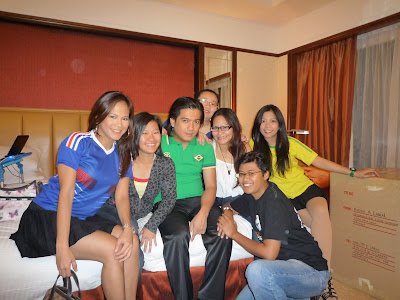 gonna miss the jokes u guys make on stage. especially "You Belong With Me"...

ive only got this time to read this and want you to know you've touched me deeply!
it felt like a sad story (coz' melfay cried,she does all the time!-hehehe!PEACE 2 u our baby!)but anyway,i know its just hanging there for(",)it is soon a happy ending.thats how positive i am and focus in healing ME inside and out.
as i always say you're one of those best couple i've met and you rock!!so i dont know why people misunderstood that.
well,anyhow thank you,thank you very much!(",)also for everything.ill see you very very very sooooon!God bless you both and selena!take care always!!!

i am missing each night im not performing with sarita and marlou.its sad to leave them but its just the right thing to do.Love you guys and missing you!(",)mwaah3x
save some fun for me!!!!weeeee(",)

@melfay - the not-so-serious version of "you belong with me" is indeed a signature of URB. kudos to aretha! :)

@aretha - thanks for the comment sis! we do miss you, even marthy misses you. :) health comes first and we're glad that your family is there to take care of you. :) love you sis! :)