Last night was a normally fun night, both during work and after work, until I got the scare of my life.

After work, we all went back to the room and changed in our PJs. As usual, we called room service and ordered our supper. While waiting for the match between Germany and Spain to start, both Marl and I were having fun with friends online and tried to flood Twitter with our shoutouts for our teams - Marl went for Germany and I of course went for Spain.

So finally our food came, Tuna Niçoise sandwich for Marl and just fruit platter for me. After his first bite with his sandwich, he already felt a stinging kind of itch on his lips and in his mouth. But because he was hungry, he just continued eating it. He would normally have slight allergies from this and that food especially seafood, so I just treated it as normal. But he knew better for himself because he felt his internal body parts swelling up. There was even a part when I didn't believe him coz I cannot see any allergic reaction on his face and skin, as he normally would have. He took an anti-histamine drug called Celestamine and waited. Twenty minutes later, he went to the toilet and had loose bowel movement. 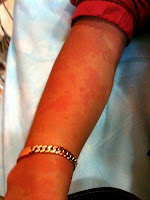 Just as the game became interesting after Spain made a goal, he asked me to call the reception if there's a hotel doctor available. Only then I knew it was more serious than his mild allergies because his face was all red. But it was past 4AM, no doctor. So we just went to the nearest 24 hour clinic that's recommended by the hotel. The limousine taxi drove slowly that Marl almost shouted at the driver to drive fast because he felt his chest and his throat swelling up plus he couldn't control his body from shaking - he was having chills or he was almost getting into a shock state! The moment the doctor in the clinic saw him, the doctor took his blood pressure (which was unusually high) and he was given a first aid anti-allergy jab which calmed him down and subsided his swelling feeling. The doctor advised me to observe Marl in the next 30 minutes in the hotel and was told that if he didn't feel any better or if it worsens, rush him to the nearest hospital or he could collapse and go into shock. 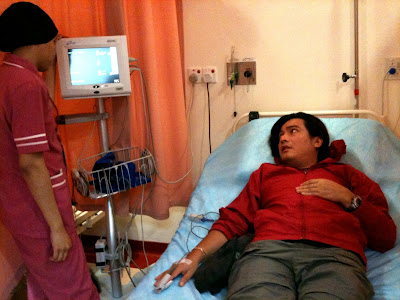 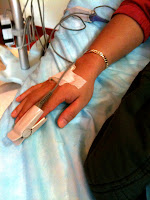 So we went back to the hotel but I think in less than 10 minutes, Marl started to feel the similar symptoms - it was coming back! So we went down to the reception to ask help from Jac of the front office as she arranged a limo taxi to take us to Gleneagles Intan Medical Centre. She also informed the emergency department of the said hospital to wait for us - everything was taken care of (thanks Jac!). After telling the doctor what happened, he was given medicines through IV (drips) and was given a nebulizer. His body was filled with red marks and he felt like blood was flowing into his head. His heart rate was even monitored because it was way too fast. But after 30 minutes of lying down in the hospital bed, he felt more relaxed and was even sleepy because of the effect of the medicines that were given to him. An hour later, he was dismissed and he felt a lot better. 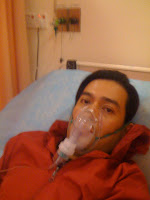 Whatever caused this allergy is unknown because there are lots of factors to consider. Maybe his tolerance to allergies was too low that a simple tuna sandwich caused it. Of course, it can't be ruled out as food poisoning as we all know that Shangri-La Hotels have the highest standards in food preparation. I wouldn't want to worry about that anymore. What matters most is my husband is now okay. We'll just have to be careful with what he eats next time.
Posted by ~*.*~ SaRiTa ~*.*~ at July 08, 2010