Happy times at the Happy Valley

It was a day that we all were looking forward to. Our friends Faye, Samanta, Ronnie, Darren & Anita, who are working in Tianjin, came to Beijing just because of that day. I was still sick but didn't want that to stop me from having fun with friends.

First, we attended our first Christmas party at the Philippine Embassy here in Beijing at noontime. There were lots of Filipinos, Filipino food and entertainment from other Filipino singers and musicians. I enjoyed my Tapsilog but didn't enjoy it 100% coz we had to eat out in the cold back garden on the embassy. And I've been coughing like hell. I even think I scared my friends away. LOL

Then at around 3PM, we headed on to Happy Valley. Boy, we thought we were late but the RMB120 ride-all-you-can ticket allowed us to have 4 fun rides until 4:30PM. Why only 4 rides? Happy Valley is a huge amusement park and the rides were located at different parts of the park. And worst, each entrance is a labyrinth-like spiral thing going up to the ride's platform. But it's all worth it after riding those rides. Why? Coz the guys I was with were all so funny. 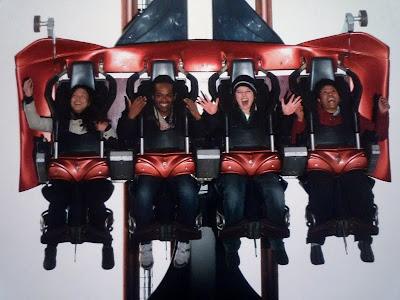 The group was basically divided to two: the braves and the demure. The brave group, consisted of me, Anita, Samanta, Faye and Darren, were the ones who took all the thrill rides, while the other group, who preferred to be called the "demure ones" (Marlou, Aretha, and Ronnie) , were the more conservative ones or should I blatantly say - scared of the thrill rides. LOL.

Just as 4:30PM hit our watches, all rides were stopped which drove us to walk towards the exit gate of the park. We were all surprised because there was a loooooong queue outside the theater before the exit gate. And only then we found out that we are entitled for a theater show too! It was my first time to watch such kind of Chinese theater show with a little acrobatic skills. And the best part was the whole stage which moves and has ledges that moves as well. The best part of it was turning the whole stage into a waterfalls with strong flow of water. It was just amazing! The show started at 5:30PM and lasted for an hour. 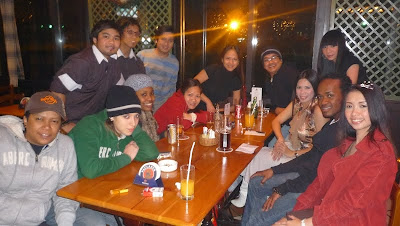 The whole gang & the Heartbeat Band at the Paulaner Bar
We were all hungry and starving by the time we left Happy Valley. We decided to have a dinner at the Pizza Hut there. Although we were all tired and sleepy, we went to the Paulaner Bar in Kempinski Hotel to watch couple of sets of our sister band, The Heartbeat Band. At around 11PM, we all decided to go back to Shangri-La Hotel, where they'd all be resting for a while before going back to Tianjin first thing in the morning the next day (Monday). But instead of resting, we all ended up chit-chatting and laughing all the way until 5:30AM! LOL.