Crossing Thailand and Cambodia Borders By Bus... And On Foot | Power Couple Travels 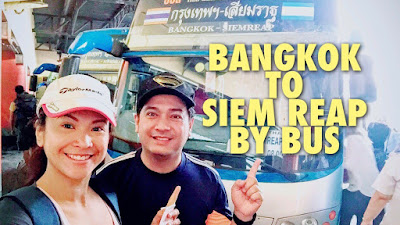 With YOLO (You Only Live Once) slogan becoming common to most nomads nowadays, there are thousands of reasons to go backpacking especially in South East Asia. Crossing borders in South East Asia has been made easy with different modes of transportation. The cheapest and comfortable way for us is by bus. That's why when we were moving on from our backpacking adventure in Thailand, we decided to take the bus to go to Siem Reap, Cambodia. The duration of the trip was about 8-9 hours depending on the traffic of vehicles and traffic of people crossing the border. For those with Philippine passports like us, we didn't need to apply visa when we enter South East Asian countries so I guess ours was faster than those who needed to get and pay for their visa on arrival.

First you have to get to Mo Chit Bus Terminal in Bangkok to get a ticket. As for us, we didn't want to take any risk in getting a ticket on the same day so we bought our ticket the day before departure. The ticket costs 750baht and you have to be specific that it's a direct bus because if not, you will be stopping by in different towns it passes by.

While on board, we were given breakfast and lunch and some water bottles. We were also asked to fill-up a manifesto-like form and was each given a lanyard ID to basically identify our buses when we reach the border. There was only 1 toilet break though so you have to hold it up until you reach the town before the border.


After the long toilet break, the bus will bring you right before the border. This is the reason why we were given IDs because the next time we'd see our bus would already be in Cambodia. On the Aranyaprathet border, you just have be alert and follow the signages and you will be led to the immigration office where you can get your exit stamp.

Once you get your exit stamp, just follow the flow of people and signages around to lead you to the Cambodian border until you see this arch that says "The Kingdom of Cambodia"; the left gate is for those entering Cambodia and the right gate is for the ones leaving Cambodia... ON FOOT.

Once you enter the Cambodian soil, you will be greeted by peddlers, beggars, and touts so you just have to beg off nicely as a lot of scams happen here every day. Again, just follow the signages, don't be lured by the big casinos around or else your bus will leave without you. Just go further and you will see the immigration office on the right side of the road. Get your entry visa and go through the market stalls where the buses are waiting. Find your bus and hop in because you'll have a lot more traveling on the road to do.

We noticed that while we were in Thailand, the right-driven bus was on the left side of the road - and it's normal. However, once we left the Cambodian border, the bus stayed on the right side of the road - just like in the Philippines and China. Takes great driving skills to do that.

The journey took around 3-4 hours and when we reached the bus company office, the boys outside opened the luggage compartment and took our bags to bring to the bus office. We didn't like that bit as we don't want anyone touching our bags when we travel and people must also have some decency to do that. We're just trying to avoid hassles and problems.

We were approached by the tuktuk drivers waiting around and said that they could send us to our guesthouse for free but we begged off. We all know that there's nothing free in this world especially when tourists and foreigners are involved, so there's a catch to it for sure. So since our guesthouse was just a 20-minute walk, we just opted for that. It was also a good way to check out the vicinity.

Anyway, check out our video to witness our adventure!