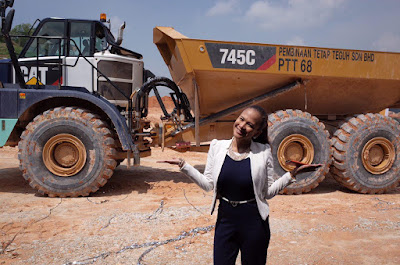 I have been fortunate to be a part of a remarkable milestone for 3 big companies: Pembinaan Tetap Teguh Sdn. Bhd., Sime Darby Industrial, and Caterpillar Inc. Last May 5, I hosted the launching of CAT 745C Articulated Truck and 349D2 L Hydraulic Excavator. The organizers and coordinators of the said event have been very helpful prior to the event - as I don't know a thing about trucks. I accepted the job because it was at daytime and I didn't have anything to do on that day. Besides, my husband Marl and my daughter Selena were also assigned in the videography - even though they already have their videography team.

We left our hotel at around 7AM, and reached just in time at 8AM for breakfast at Denai Alam Recreational & Riding Club (DARC) in Shah, Alam. The horse club is owned by our good friend and big brother, Terry Teo, who is also the executive chairman of PTT and who was the one who suggested the event organizers to get me as the emcee. The event was just 5-10 minutes away from DARC. I went ahead of them as I need to go for a briefing with the organizers. The rest of them - Kuya Terry and his guests, along with my family - arrived the venue in timely fashion. Yes, they were late as VIPs would be, LOL!

Weather was great, but it was too hot during noontime. But thankfully, the event went by flawlessly and we went back to the hotel just in time for our afternoon nap - before working at night. I never imagined that I would be able to witness an event like this. For me, it's just a monster truck that I would usually see in construction sites. But what I didn't know that a CAT 745C truck costs about Php 20 Million (RM 1.7 Million) - and Kuya Terry's company bought at least 3 of them - and hundred over different types of construction trucks for their different projects. Maybe I can just scrape off the dust from one of its huge tires, sell the dust online, and I can already live a decent life for a few months - that's how expensive it is! LOL!

To those behind the event, thank you so much! Here's the video that took me forever to edit - because my Mac has been acting up BIG TIME! Anyway, here it is after 48 years...

PS: For our emcee/hosting/photography/videography services, please send an inquiry to saritacarreon@gmail.com thanks!
Posted by SaritaOnline at May 19, 2016