HAPPY NEW YEAR! This is my first post for the year 2013 and I just thought I'd drop by my blog to leave a very short post. How was your New Year's Eve countdown? I had a blast at the countdown show at the 19th floor of Century Park Hotel last night. I performed with hubby Marl on the keyboard and Rudy Sumang on the sax. I was sooo excited and overjoyed that I even performed 80 minutes straight for our countdown set instead of just an hour. Well, the guests were having a great time and they kept on shouting "more" every after supposedly-last song for the evening. That's the kind of crowd that I'd like to perform for. And I guess it's just fitting to give back to people by obliging to their requests. Yes, I was tired after the countdown, throat was so dry, and feet were burning from the 5-inch stiletto. But I felt the sense of completeness... it was sooo fulfilling for me. And for a performing artist, that's the most important thing.

As everyone takes a break and are still on holiday on the first day of the year, I went on to do my happy-hour gig at the casino of Heritage Hotel. Yes, I still worked on the first day of the year. Friends asked me if I wasn't tired from last night's show. I sure was. But I believe that working on the first day of the year officially sparks a great new beginning. Then I went to SM Mall of Asia to have dinner with hubby and mini-me. We were supposed to watch a movie but there were lots of people so we all decided to go back home instead. We can watch movies at the nearby SM Megamall anytime we want to, anyway. :) 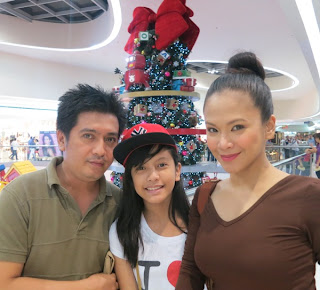