Obviously, you already know what I'll be talking about in this post. Yes, after how many years and having other camera brands, I've finally come back to Canon - the first brand I've ever owned.

I lost my Panasonic Lumix FX35, the one that my friend Dev gave me, when I sang at an event at Nuvali in Sta. Rosa, Laguna back in March. I was heartbroken as it had documented all the happenings in my life for the past couple of years. Then the company I'm working for at daytime provided me with a camera I requested for taking vides of the bands - a Panasonic Lumix LX5. But I can't always bring the camera with me as it's bulky and I'd be held responsible if I damage or lose it.

So after getting my talent fee from my Quaker Oats commercial, I spent some of them for the things I need for my gigs and saved some moolah to buy me a new camera. Originally, I was torn between Nikon P300/P310 and Canon S100. But seeing the test videos of both cameras, I knew that Canon Powershot S100 would be perfect for a video buff like me. So yesterday, we went to Hidalgo (in downtown Quaipo, Manila) to canvass for the prices there. But I found out that the prices aren't way cheaper than the prices in the malls. So I wanted to just buy online instead and I tweeted about it.

Guess what?!! One of my followers and a great friend on Twitter, @sofiewithlove, happens to have a husband who has an online shop for cameras and gadgets. She saw my tweet and offered me good price of 17,000 pesos compared to 23,000-24,000 pesos in Hidalgo. Yes, warranty is only applicable in their shop, but that's okay.

The transaction was fast. I spoke to Sofie's husband, Ronald, while I was at a costume fitting for another big project, at around 5PM. He met up with my hubby Marl at around 6:30PM and voila! Transaction's done! I will soon post about their online shop here on my blog soon. Big thanks to Sofie and Ronald for making me "100% Happy Sars" with my S100!

Expect the some new photos and videos to be posted soon. Time to catch up on what I have missed. I still have my Nikon D7000, which I don't bring around, and Panasonic Lumix LX5 for work. 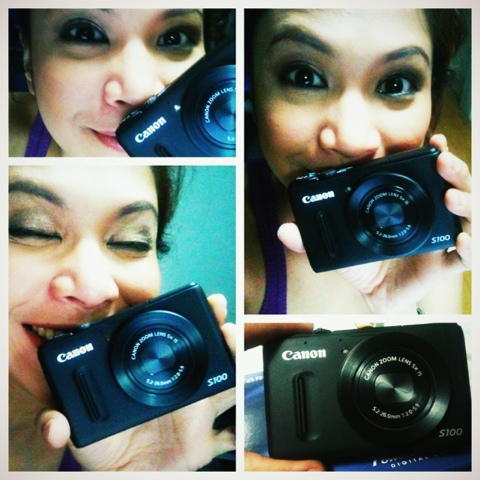