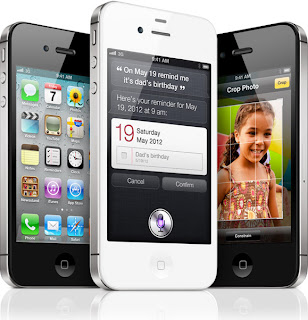 So the hype is over. Those who were expecting an iPhone 5 coming out
today were disappointed. In fact, VERY disappointed. Apple just
announced iPhone4S, which is a chip off the ol' iPhone 4
aesthetically. But don't be fooled. Because although they might look
exactly the same, they have different features inside.

iPhone 4S has faster processor with its dual-core A5 chip, which is
twice as fast as the iPhone 4. I said blah and was about to get ready
to multitask and do other things (coz I'm a busy person you know!
LOL). But wait! The new iPhone 4S has an all-new 8MP camera and
optics, can shoot photos faster than my current point-and-shoot
camera, and can shoot HD movies in 1080p resolution. My jaw just
dropped. That's freakin' awesome! You had me there, Apple. You really
had me there.

And of course, with iOS 5, one can enjoy features like stalking your
friends with Find My Friends app. iCloud makes syncing your files from
and to all your devices as swiftly as it can. And all other features.
But the most talked about stuff after the keynote and probably the
feature that made me excited and happy is the Siri app. Apparently,
you don't have to be a loner anymore. You've got Siri, your new
trusted and loyal friend/assistant/secretary/nanny. I'd like to call
it Yaya Siri. You can talk to Siri, have her set you an appointment by
just talking to your iPhone 4S. Yes, you literally talk to Siri out
loud. In public places. Or even in the toilet. Now, I don't have to be
alone in my toilet moments anymore, eh? You can talk to it like your yaya:
"Siri, can you please wipe my ass?", "Siri, where is the tabo?",
"Siri, can you brush my teeth?". Siri will be over-used and wasted, I
guess. LOL!

So there you go. I was planning to skip this version of iPhone, EXCEPT
that I'm in need of a great camera right now. Therefore, I NEED an
iPhone 4S. It will be released in the US and other places except the
Philippines and China as early as October 14. Singapore and Hong Kong
release is October 28th, I think. And yes, it will be available in
black or white color. I can't wait to get one! :)

But to those of you expecting an iPhone 5, don't worry. Chinese phone
markets might already have iPhone 5's in different colors if you want.
Or maybe in different sizes, too. Exclusively released in China, of
course. *just kidding*
Posted by ~*.*~ SaRiTa ~*.*~ at October 05, 2011