When I turned 25 few years ago, I decided not to grow older anymore. Therefore, I planned to stayed Forever 25. And so I did! :) Yes, it was my Forever-25th birthday last Thursday, September 29. And to those remembered, thank you guys for all the greetings! Love you all! :)

MIDNIGHT SURPRISE
Since hubby and I have been working together for a 15 years, I know that every birthday should be welcomed with a greeting and a birthday song - as traditionally as it can be. But this year was different because it's only the two of us performing now, so there is no 3rd person he can connive with. Before our last set, I went to the toilet and since I was chatting with my friend Claire on Skype at that time, I was busy typing on my iPad while walking back to the bar. When I went to the stage, hubby played the birthday song which made me chuckle and I was about to react or say something funny to him - because there were only 3 tables left, but I saw a group of girls coming to the stage, one of them was bringing a birthday cake... I was really surprised! Then the lights were dimmed when the cake with a lighted candle was given to me onstage while they were singing an acappella "Happy Birthday"song. It was really special and it made me want to cry. And the moment I blew the candle out, the lights were all lit up again. When I made my short speech, I told the staff that I was really surprised and that they're making me cry. But I thanked them including all our guests who sang the birthday song for me. Of course, I thanked hubby who organized it all. :) 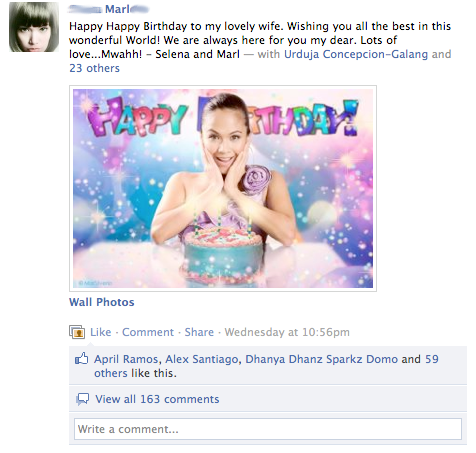 What I didn't know is that an hour before midnight, Hubby Marl posted my birthday photo on Facebook. The number of comments says it all. It was filled with greetings from friends and acquaintances I haven't heard from in such a long time. It took my a whole freakin' day to reply to them, but yeah, it was great touching base with them again and to know that they remembered that it was my birthday... eventhough, Facebook told them about it in their home page. LOL. But of all the birthday greetings, there was someone special that stood out. It's my former colleague Aretha who wrote the comments (below) that made me cry. I was chatting with my friends Sam&Faye when I got the comments and it really swelled up my eyes... because those words mean a lot to me. Thanks my sis Aretha!

TWITTER MADNESS
On Twitter, I've been having a countdown since September came and would tweet about me turning Forever 25 on my birthday. There were even two favorite tweeps, @dailyhappmeal & @ronniedare, who started greeting me everyday for a week. Well, that's because I told them to hahaha! :) But yeah, they never failed to make me smile every day until my Forever 25th birthday. And so the greetings came pouring even before my birthday. I even tweeted this just for fun:

And also for fun, I asked a favor to my friend @aubzie to help me to convince the handsome Filipino actor/comedian/host Luis Manzano to tweet and greet me on my birthday. He doesn't know me personally but I was sooooo glad that he did greet me without further convincing hahaha! :) I love you, Lucky! Hahaha! Read some of the tweets that highlighted my Twitter birthday wish:

And here are the top 100 replies and greetings from my favorite
followers on Twitter that has the #SARSday hashtag.
Thank you guys! I'll email your iPad2 on high-res pic, ok? :)

MY ANGRY BIRDS PACKAGE :)
I also got some gifts from the princessette in Manila. She's the one who's crazy for Angry Birds so I don't know if the gifts are really for me or for her! Hahaha! Thank you, my baby! Here are the gifts that she showed to me via Skype which I will claim when I get back to Manila... if she's not tempted to open them yet. LOL! 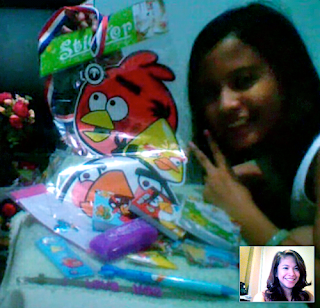