I've been quite busy lately as it was our last week of performance at the Pub and at the same, lots of scheduled shoots - like this shoot that I was raving about. I was so flattered to be the model on Manny Librodo's workshop, Landscape of Emotions 2,  in Kuala Lumpur - for the second time around - along with the beautiful Thai-model-cum-Hollywood-actress Ms. Krystal Vee. But this time, we are joined by another model Keerat and a male model Kenneth. And again, it's organized by Dr. Ban Hup Teh.

My good friend Reen purposely took a leave from her work to assist us as the reflectorer, driver, and assistant on that day. I think she must take all the credits for being the one who made it possible for us to attend this workshop. Marl was as equally excited as this was considered his 2nd workshop with Manny Librodo after Cebu, because he was the VA during Manny's first workshop in KL. But this time, he really took everything seriously.
I rented a Javanese outfit from CentreStage DynamicVision studio in preparation for this shoot. Rental wasn't cheap at all. The whole outfit complete with the headdress, accessories, and all costed RM150. But it's really nice. Second set was a Chinese outfit with long purple 'chong-sam' and a matching headdress.
Other sets were bridal and Chinese for Krystal, Indian for Keerat and our male model just became my partner on some photos as well as Krystal's.
I had fun and much more confident this time. Marl and I adore Manny and Krystal so it was really another great opportunity for us not to be missed. Also, we had another fun shoot the day after the workshop!!! :)
WATCH OUT FOR THE PHOTOS IN MY PORTFOLIO!!! 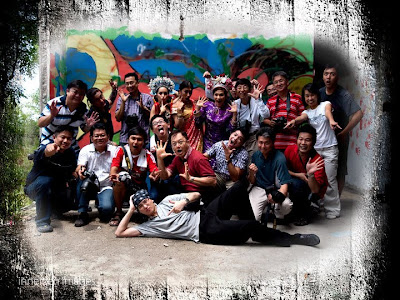 OR
CHECK OUT MY UPDATED PORTFOLIO
OR
Visit Marl's BADEEDADEE PHOTOGRAPHY page on Facebook
Posted by ~*.*~ SaRiTa ~*.*~ at August 06, 2010