I know my life has been melodramatic lately as it ought to be but that doesn't stop luck from pushing its way towards me. We had a four day non-working holiday from October 1 - which isn't a common thing for entertainment bands like us. But we're in Beijing and hey, who wouldn't want to have that great chance to rest for 4 days? 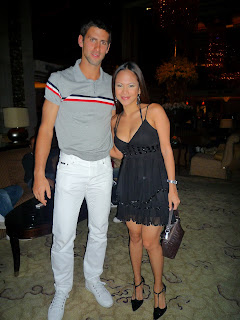 During that time, just as the whole country was celebrating its 60th anniversary, the tennis superstars and players for the China Open 2009 began arriving. At our hotel! Yes, they all stayed in our hotel and had the chance to mingle some of them. And one of them is ranked as world's number 4 in Men's Tennis - Serbia's Novak Djokovic.

I remember very well that when we got back to work on Monday, October 5, we saw Novak and his gang (coach, fitness coach and physiotherapist) sitting in the lobby lounge. I approached him and asked him if I could take a photo with him and he gladly obliged. After we all took photos with him, he knew that we are the band playing at the bar and said he would check us out later. Few songs after we began our 2nd set, they transferred inside the bar and started to liven up the otherwise-so-boring-night, singing and dancing with us. We were all starstruck by him but he stayed grounded and made us feel like he's just one of us. 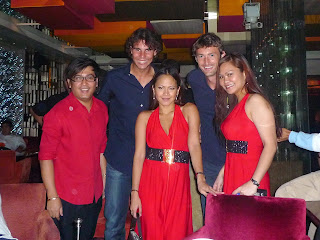 And that started it.

October 6, Tuesday - More players came to our bar as if Novak invited them all. That was the most fun night at the bar so far. Everyone was dancing, singing and enjoying the night away. The Russian tennis ladies really knew how to liven up the place. Rafael Nadal and Juan Carlos Ferrero were also there together with their own gangs. It was just a perfect night for us. Until the government police who was in-charged outside of the hotel for the China Open came in our bar after midnight - to put down the volume. Boo! 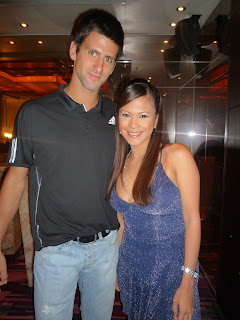 October 7, Wednesday - Novak had his match against Viktor Troicki at night as we had our 1st and 2nd set. But being the great "supporter" that he is to our band, he spent the rest of the night at the bar, listening to us and chatting with us things that are not tennis-related.

October 8, Thursday - We met him at the gym in the afternoon as he was having his training with his 'gang'. At night in the bar, since he couldn't stay long that night as he had to sleep early and prepare for his match the day after, Novak managed to drop by during our coffee break to personally invite us to watch his quarterfinals match. And our reactions? WAHHHHHHHH! We got crazy! LOL

October 9, Friday - The three of us got up at noontime and proceeded to the venue of the China Open 2009. As advised by Novak, we went to the Will Call counter to get the tickets that he had secured for us. We got in the Center Court just in time for his match against Fernando Verdasco. It was our first time to see tennis match live and we feel so lucky and thankful to Novak for making it happen. Watching tennis live is really 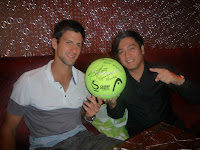 intense than watching on TV. You could feel how people held their breaths every time the tennis ball would swing left and right. But yessssss! Novak Djokovic won after 3 sets! After the match, we lingered a little bit more around the area to see the booths and souvenir shops. Marl bought a USB flashdisk with China Open logo on it. Aretha bought a red China Open T-shirt. And Marl got me a China Open windbreaker - as a belated birthday present. We went back to the hotel to rest and at night, Novak dropped by the bar to unwind and chit-chat a bit with us. We had him sign the souvenir 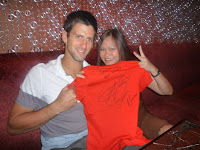 items we bought but since I couldn't make him sign the black windbreaker that I have (coz the marker pen was black, too), I just asked him to sign a transparent plastic leaf off my songbook. He left me a sweet note. Awwwwww...

October 10, Saturday - I woke up to a great news that Novak Djokovic won the semifinals match against Robin Soderling. At night, it was great night at work and it's of course because Novak dropped by again for couple of sets. I made him sing his favorite part in the song "I Will Survive". Can you guess which part? Well, it's the "lalalalalalaaaa" part in the end! LOL. He again invited us to watch the China Open 2009 Finals - the biggest day for him in Beijing 2009! :-)

Email ThisBlogThis!Share to TwitterShare to FacebookShare to Pinterest
Labels: China