A Night To Remember: Party with Novak Djokovic

After the China Open 2009 match, we went back to the hotel and had dinner. I've been on a strict diet of green salad and fruits for more than a week but since it was our off day, I indulged myself to a sumptuous dinner. The best (or worst?) part of it was finishing 5 scoops of chocolate ice cream for dessert!

It was past 9PM. I just waited for Nole's SMS though I wasn't really expecting him to do so, since I know that the organizer might have a party for him and that they might be going back to the hotel late. Right after dinner, we went to Aretha's room to meet our singer-friends, Anita & Darren, who came to Beijing from Tianjin. As we were chatting and laughing, I got an SMS from Nole to meet him in the hotel lobby at 10:30PM. I rushed back to my room, pulled my new (and only) pair of pants, wore my hot heels and checked myself in the mirror to make sure I looked okay. Marl and I went down to the lobby to meet Nole, his coach, his trainer and his physiotherapist.

We all headed to where the action is - even on a Sunday night - at the Russian club called Chocolate. Marl and I were in the same cab with Nole sitting infront. His team followed us behind. Before leaving the hotel, there was a Chinese woman who wanted to get in the same cab with us. That crazy woman has been stalking Nole for days and she wanted to join our party that she tried to open the cab's door as it was leaving the hotel! Really crazy and scary! And yes, she got in another cab to follow us to the Chocolate Club as well!

When we arrived to the vicinity, we thought it would be a dead night because the surrounding 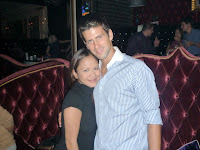 was sooo quiet. But we were ushered down to the basement where the underground club is actually located. Nole and his team liked the ambience and we were ushered to a VIP-like round couch. The Chinese stalker followed us but as Nole was being nice and never wanted to ruin his night, he just let the Chinese woman hang around the table.

Nole ordered for a bottle of Bombay Sapphire and some tonic water and we started drinking, singing along and dancing around our table. Aretha came an hour after together with Anita and Darren. We had good fun, and I 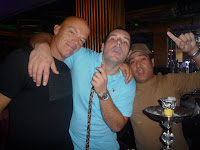 guess it was the best party I've been to so far. Private as it was, but everyone was in for a good night. Nole was of course enjoying the moment as he worked hard for the past 10 days, just isolating himself in the hotel most of the time when he's not in the court.

At midnight, there was a special show at the Chocolate Club and we had a great laugh and enjoyed it very much. Marian, Nole's coach, ordered shisha (hookah) to add in the fun. We were also given our own pipes to be used since the shisha was usually passed around. It was my first time to try it and all of us, including Nole, would really get excited when 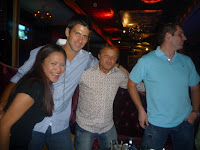 our turn comes. But Nole just did a couple of puff since we don't really know what's in that bottle of heavenly smoke. The Russian band came back onstage and it was party time again. Nole and I, together with our friends, rushed to the dancefloor and danced the night away. While Nole would also dance with Anita and Aretha, I was his constant dance partner. :-)

It was 4AM when we left the club and after 3 bottles of Bombay Sapphire, most of us were already tipsy. The Chinese stalker never gave up and insisted Nole to take 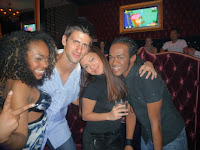 the private car that the government issued (?) so that it would be safe for him. I don't think so, neither did everyone else. Nole insisted to take a cab, but this time, it was me, Nole (in the middle) and Marl on the backseat while Nole's trainer, Jiji, sits infront. Oh and yes, the stalker followed us back to the hotel, too.

When we reached the hotel, we all sat in the lobby and Nole was still in a party mood. He invited all of us in his suite to continue partying. The Chinese woman wanted to come up with us but I told the security to stop her. He turned on the sound system and we all had a great laugh 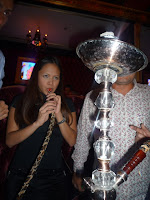 because he asked each and everyone of us to show what we got - for fun's sake. His coach Marian did a headstand, Darren did a split, Anita did a bit of a dance, Aretha did "ocho-ocho", his trainer Jiji did juggling, I did another split and Nole did a funny headstand. Nole broke down and rolled on the floor laughing when his physiotherapist Miljan took off his pants as part of the "deal".

And too soon we had to part. As much as we would love to give in to Nole's request and stay longer, we also know that they needed to get some rest before catching the flight to Shanghai in a couple of hours. It was surely a night to be remembered forever. I know Nole have met and will meet thousands and millions of other people but I know deep in my heart that he will always remember us, as what he had said, "the first persons from the Philippines I have met". 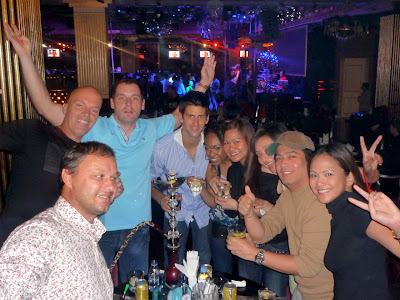 Hi Sarita, Thanks for visiting my blog!